On May 20th I was big and pregnant.  My body was starting to hurt whether I stood, sat down, laid down...I was just getting miserable.  I was ready to have the baby!  I had been praying every single day that God would help me to have the baby -- SOON.  I was so ready.

I had my weekly doctor's appointment scheduled for the next day, but I was going to call and ask if there were any cancellations because I just wanted to go in, have my doctor strip my membranes, and pray it would do something for me.  I had been dilated to 4 cm and my cervix was open and ready for weeks -- just no Phebe.

I just finished taking a shower when my phone rang.  The nurse asked if I could come in that afternoon instead of waiting till the next day.  YES!  My mom and sister came with me to the appointment.  My doctor swept my membranes (there were only 2 that she swiped...hardly anything was holding Phebe up anymore at that point) and then talked to me for a little bit.  She was even shocked I was still pregnant at that point.

She did tell me, though, that she was leaving for the weekend and wouldn't be back till Tuesday.  If I wanted her to deliver the baby before she left, I would have to schedule an induction for the next morning at 6:00 a.m.  I was so disappointed.  This whole pregnancy I prayed and asked God to allow me to go into labor on my own.  I had never experienced it and I really wanted to know what it felt like since this would be my last pregnancy.  I went ahead and scheduled my induction and felt discouraged.

After my appointment we went to Walmart to get some last minute items.  While walking around I did feel like my insides were going to fall out of my body, but no contractions quite yet.  We went home and had dinner with the whole family.  Around 8:30 p.m. I started feeling some contractions.  Nothing consistent, just here and there.  I decided to go on another walk hoping to cause more, but as soon as we went walking I felt like things stopped.  I was pretty irritable at that point.  I was not going to get what I wanted.  I felt like giving up.

I ended up going to bed.  I figured I might as well try and rest some before waking up so early.  Paul knew how discouraged I was, so he decided to help me take my mind off of it...by telling me fish stories.  See, the whole time my family visited the guys went fishing every single night!  They had so much fun and had plenty of stories to tell.  It actually did help me feel a little better.

Around 2:00 a.m. I woke up because of a hard contraction.  I laid there for a little bit and ended up feeling another strong one.  I got up and went to the bathroom and tried to figure out if it was just a fluky thing...or if this was the real deal.  I went back to bed and laid there for about 30-45 minutes before I woke Paul up and said, "I think this is it."

Paul got up and woke up my parents.  I slowly got out of bed in between contractions and went to sit on the exercise ball.  It didn't take long before my contractions were 1-2 minutes apart and my dad said, "And why are we not at the hospital yet?"

Getting in the car and driving to the hospital was pretty unpleasant for me.  I was very thankful we lived at the bottom of the hill and the hospital was only a couple blocks away!  Before I knew it we were in the room and I was getting hooked up.

I don't remember what time my water actually broke, but I felt the gush and immediately wanted to cry happy tears!  In the midst of pain I remember thanking God over and over for answering my request.  It may seem silly to others, but I wanted this so bad.

I only felt gushes of water here and there with contractions.  I figured Phebe must have been cutting off the water somehow because I didn't feel the huge ocean-like gush that I was used to when they would break my water with the others.

This labor was different than my other labors.  Because I was induced with the other ones I was used to the Pitocin contractions -- extreme and on top of each other.  Going into labor naturally is so opposite of that.  There were some breaks in between contractions that I actually dozed off until the next one hit.  Because the contractions were not on top of each other like I was used to, I just knew I would be in labor all day and I did not want that.  I never wanted drugs with any of my other labors, but this time I remember telling my mom and Paul both that I needed them.  I wasn't joking.  Get me the drugs.  My mom had to tell me more than once that it was too late -- I was dilated to 8 and Phebe was coming!  I didn't comprehend what she was saying because I wasn't having as many contractions...

It wasn't long before my favorite nurse came in to do the final check and my doctor was behind her.  They knew Phebe was cutting off the rest of the water, so my doctor finished breaking the sack with her fancy little hook and I immediately felt my body start to push.  I didn't know what was going on, but I pushed 3-4 times and here came beautiful, sweet Phebe and the rest of my water following behind helping to push her out. 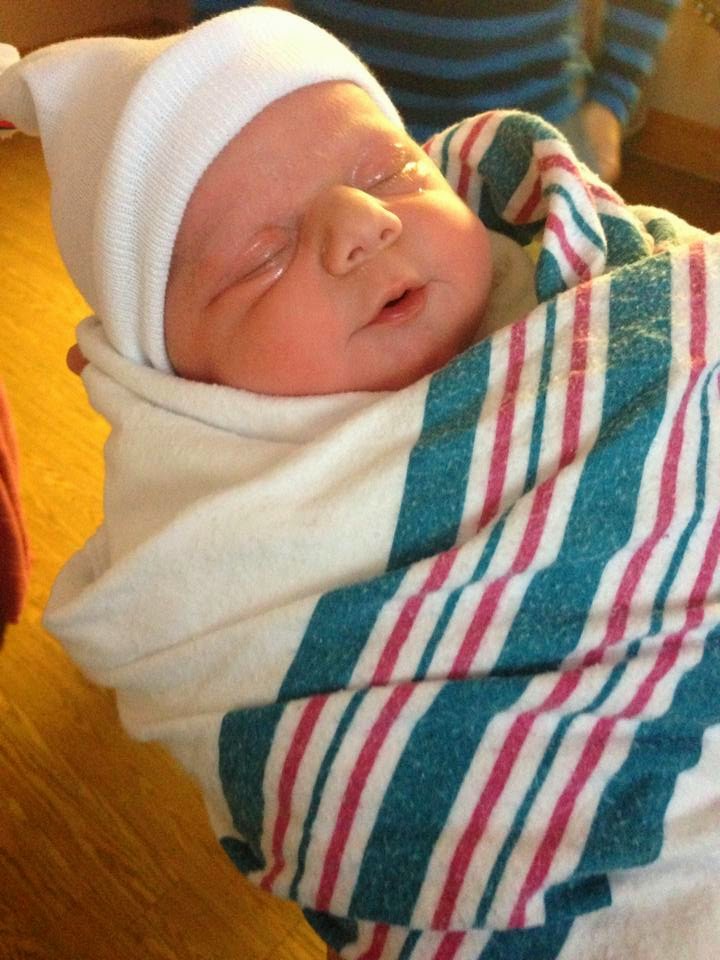 I can't help but tear up when I think of the story all over again.  Giving birth is one of the most amazing things I have every experienced -- and the fact that I was able to do it on my own without being induced...I cannot even begin to tell you how grateful I feel.  I will always be thankful for the Lord answering my prayer. 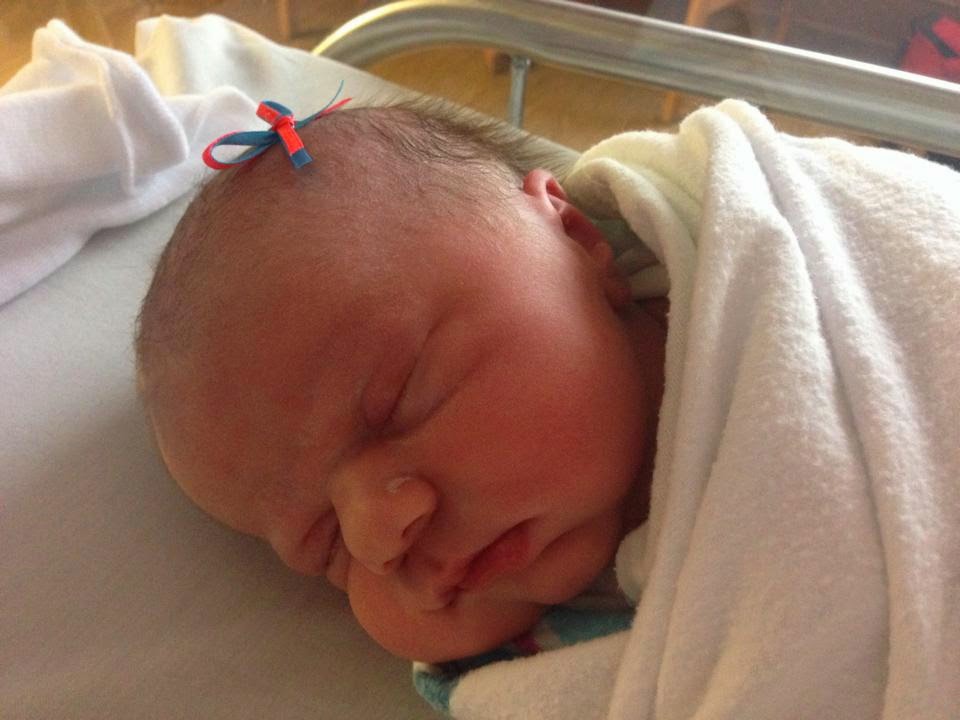 Not long after Phebe was born people realized just how tired they were so one by one they left to go back to bed.  Paul and I crashed as well and slept for hours.  My other babies were not able to meet their new sister as soon as she was born because there was a ban at the hospital and no one under the age of 18 was allowed in the maternity section.  After everyone got some rest, though, we did sneak out of the maternity ward and down the hall so our little ones could say hello.  Thanks to my favorite nurse who will remain unnamed. :-) 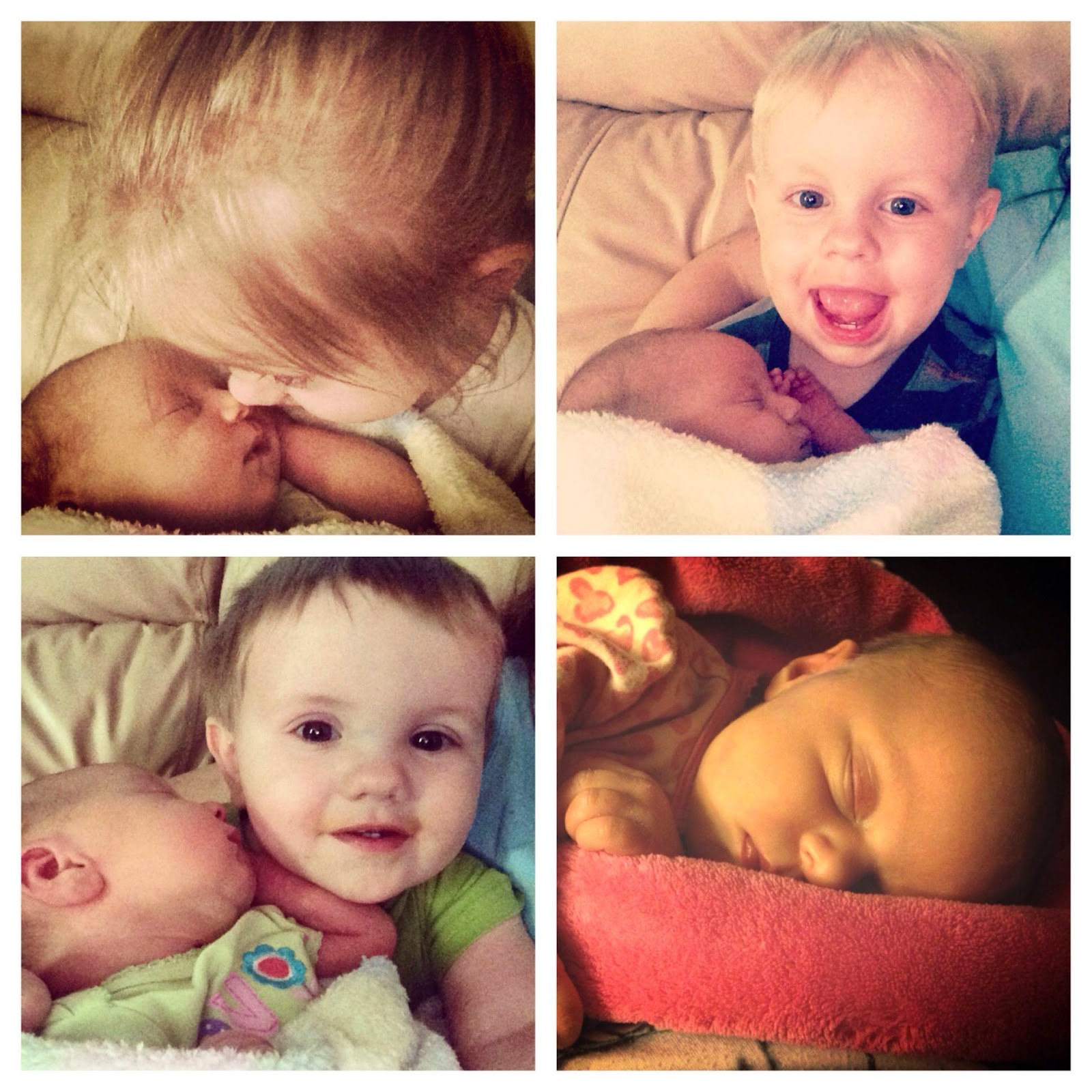 Phebe is now 12 days old and is still adored by all.  She is the easiest baby...  She gets mauled all the time by her siblings showering her with sloppy, wet kisses and big, bear hugs.  She doesn't mind. :-)  She is so beautiful...  I look forward to the day when she is older and she wears matching outfits with Zoe -- but until that day comes, I will enjoy each and everyday I have left with a newborn in the house.  It's bittersweet to think about her being our last baby!