Will we ever see the light?

A couple nights ago Zoe was complaining about not feeling well.  I didn't think much of it at first because I had noticed she was in the habit of saying "me not feel dood" a lot since catching the flu bug earlier in the month.  Well.. she was serious this time.  Poor Zoe threw up all over me, herself, the floor.. I was slipping on it trying to get her to the nearest toilet or trash can.. I'm sure we were a sight!
After she threw up her whole dinner I prayed that it was just a fluke and she would be ok, but I could tell by her face that we were in for a long night.  I made a bed for Zoe and I on the couch, kissed Paul goodnight and wished him a happy anniversary (did I forget to mention that part?) and tried to keep Zoe comfortable.
Even though Zoe didn't have anything left in her system she was still dry heaving and throwing up whatever she could every 15-30 minutes.  It was a nightmare.  Since I couldn't get any sleep, I decided to finish up the third season of Dowton Abbey.  Big mistake.  At 3:00 in the morning I'm bawling my eyes out all alone!
After making myself miserable by watching that show, I tried to get some rest.  Like I said before, Zoe was throwing up every 30 minutes so by the time I felt my body relax I would jump up and grab her bucket just in time for her to lose her contents.
6:00 a.m. came bright and early.  I could hear Paul hit the snooze a couple of times.  I don't blame him!  He later told me that he was up the whole night.  Every time he heard Zoe throw up he would pray for her.  Unfortunately it came time for him to go to work and I didn't see him again till later in the afternoon.
Thankfully Paul's mom came over and took Max so I could take care of Zoe without chasing him around.  She also brought Zoe some yogurt and jello --- things that would be light on her tummy.  I spent the whole day rubbing Zoe's back as she was bent over her bucket.  I couldn't help but get a little emotional (I was tired, ok?!) and beg God to touch my poor little girl. 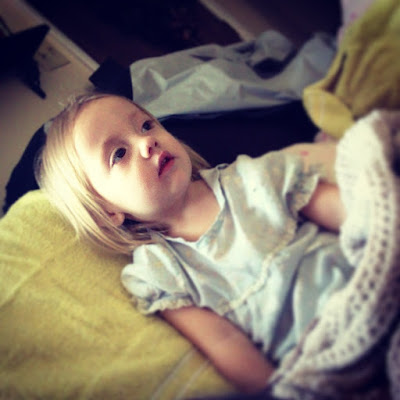 We watched a lot of kid movies and tv shows on Netflix.  At one point in time Zoe's body let her get some rest and she took a little nap.  I took advantage and napped too.  Forty-five minutes did not help me feel better at all!  I'm sure it didn't for Zoe either!
Paul got off work and picked up Max for me.  When they came home, they proudly brought in a pretty balloon and little kitty with bunny ears for their sick girl.  It made Zoe's day!  She loved her little present from Dad and Bub!  Around 9:00 that night Zoe seemed to act more like herself.  She was even wanting candy!  Crazy girl.
I am so thankful we didn't have a second night of throwing up.  Zoe slept through the night and even slept in some this morning!  Her body needed it!  The bummer part is that not long after she woke up she was emotional.  She cried over everything all. stinking. day. 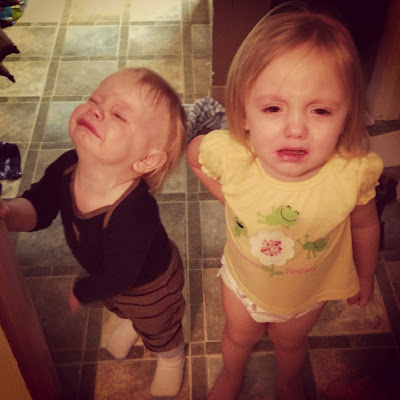 It wasn't long before everyone else in the house was chiming in and crying with her.  Over nothing.  A Momma only has a certain amount of patience before she gets a permanent tick!  Just kidding.  But seriously. =D 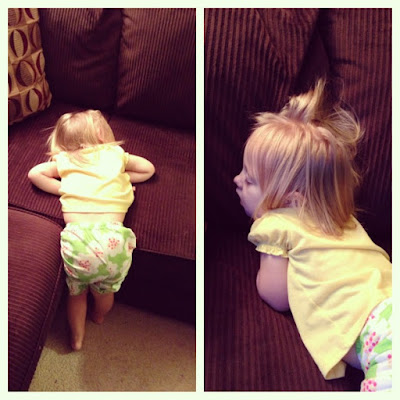 I can tell she is not 100% yet, and I do feel bad for my little girl.  I have prayed for her all day asking God to touch her and make sure she doesn't relapse!  That would be awful for her.  I guess we shall see how she feels in the morning!  Hopefully well enough to go to Sunday school..
This winter has been the worst for people getting sick.  I hate it!  I want everyone to be healthy again and I want us to have warmer weather so we can enjoy the outdoors!  Will we ever be able to go outside again?
The weather was beautiful today!  Most of the ice in my front yard has finally melted --- I can put my Christmas trees and reindeer yard decorations away now!  But I can't help but wonder if there's one more blizzard coming.. it is Montana you know! 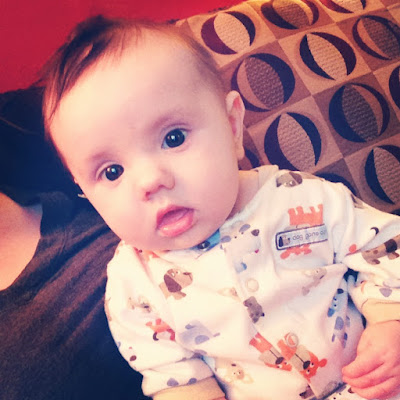 By the way, I thank God that this little guy has been staying well!  He has only had a stuffy nose here and there but that is IT!  Benefits of being a nursing baby!
I guess I better try and get some sleep just in case I am needed in the middle of the night.  You never know around here!  ::grumble::  Winter is not my favorite time of year.  Well.. the last part of it anyways!  C'mon spring!