Respiratory syncytial virus infection, usually called RSV, is a lot like a bad cold. It causes the same symptoms. And like a cold, it is very common and very contagious. Most children have had it at least once by age 2.
RSV is usually not something to worry about. But it can lead to pneumonia or other problems in some people, especially babies. So it’s important to watch the symptoms and call your doctor if they get worse.
Last night Paul and I finally took Zoe to the ER because I was concerned about Zoe's throat and nervous that she may have strep or thrush.  After spending at least 4 hours there and them doing blood work and chest x-rays, we found out that Zoe does not have strep throat or thrush, but she does have RSV -- and a mild case of it since 9 other babies have been admitted for the same symptoms.  We are so thankful it wasn't anything worse and we were able to take our baby home.
There are no antibiotics that treat RSV but the doctors said I'm doing a great job doing what I'm doing.  So I've been continuing with what I've been doing since Wednesday.  God will continue to touch her body, and one day soon we will have our happy baby back!
This Wednesday Paul and I get to see our second baby!  We are so excited to see our little bug.  I wouldn't say that Paul is more excited with this second pregnancy, but because we've already been down this path before and he knows what's going to happen, he's showing excitement earlier in this pregnancy than he did with Zoe.  That sounds awful..  He was excited with Zoe's pregnancy, don't get me wrong, but.. this one is just different.  Never mind.  We're ecstatic!  I hope to have pictures or our little one soon.
Oh!  I almost forgot!  Paul was given a Northern Alumni Association Fine Arts Scholarship this past Friday.  They only give out one a year and the committee comes together and chooses one student they think deserves this award.  I am so proud of Paul!  He definitely works hard in his schooling and deserves any award they give him.  Going to school is a sacrifice, especially when you're married and have children, but here he is doing the best he can and is doing so very well, I think. 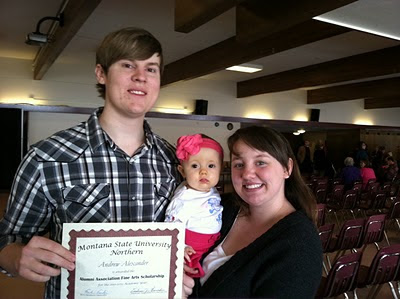 I figured you all would enjoy a picture of our little family, since it's been awhile.. :)
That's about all that's new around here.  I'm still pushing for internet at our house!  I hope we can finally make time to just do it.  Cross your fingers!
Posted by Grace & Co at 6:35 PM