This past weekend we went to our church's Regional Convention in Isabel, SD.  It is an 8-9 hour long drive from Havre.  Our kids did extremely well on our way there!  They had their movies and snacks so we didn't hear much from the back.  We listened to an audio book in the front and that helped pass the time for awhile too.
But nearing the end of our trip... 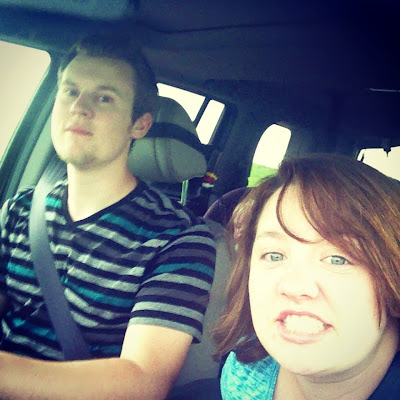 ...we were done.  We all were getting pretty restless. 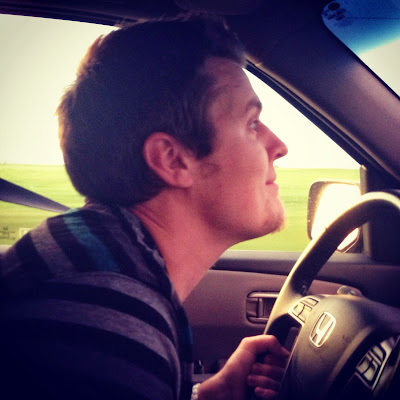 Some were even getting loopy!  Haha!  Paul cracks me up when we go on road trips.  There's a side of him I don't see very often.  He gets wide eyed and starts screaming like a maniac.  It's hilarious!  He keeps me laughing. :-) 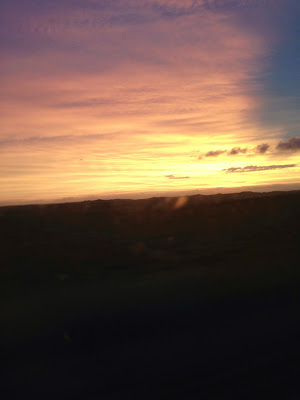 South Dakota had some very pretty sunsets.  This picture I took with my iPhone does not even show the amazing colors we saw!  And the sun...it was so orange!  I enjoyed watching the sunset very much.
We got to our destination around 9:30-10:00 I think.  We all were SO GLAD to finally be there!  We quickly unpacked the car and went straight to bed.  When my alarm went off in the morning I was so disappointed because I still needed a lot more sleep.  I drank coffee every morning, and every break to keep my eyes somewhat open! ;-)
It was great seeing the people of our region!  Some were not able to attend, like Sister Joann Eddy and Brother Scott.  We prayed for them often during our services and I have continued to pray for them since being home! 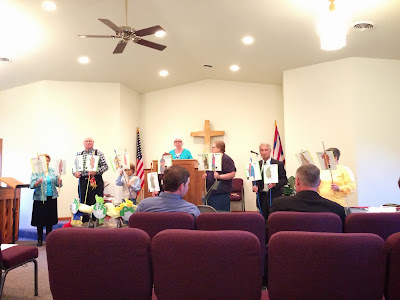 Sister Bock took over to Sister Joann and I couldn't help but chuckle through the whole thing!  Sister Joann puts so much effort into her Sunday school boosts and Sister Bock did a great job!  Sister Joann had all the materials for a Life Boat.  There is only one door to the Life Boat, and in order to get on you must get your ticket from Jesus!  She even put together little tickets for the Life Boat for each and every person at the convention, and we are supposed to write down the names of those we need to pray for who still need their ticket aka salvation.  I still have my ticket in my Bible as a reminder to pray for my unsaved family and friends.  I'm so thankful for the hard work and faith that Sister Joann Eddy has for Sunday school!  She was such a blessing to me even though she wasn't able to be there. 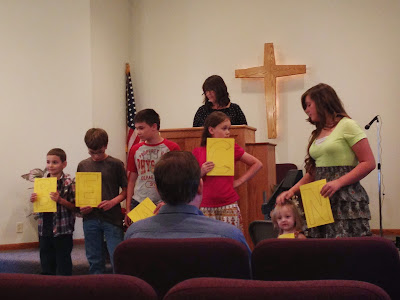 Nancy used some good lookin' kids for her boost. :-)  It's kind of hard to see, but they're spelling out the word BEACON.  Each letter stood for something different...but I honestly can't remember now what they were.  That's what I get for not writing things down!  But we do need to be a beacon for the lost souls, amen?! 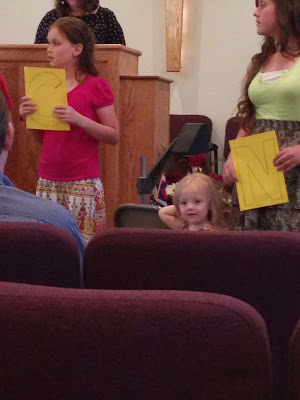 Zoe held the letter O.  We didn't see it half the time. Haha!  But she did great standing up there with the other kids! 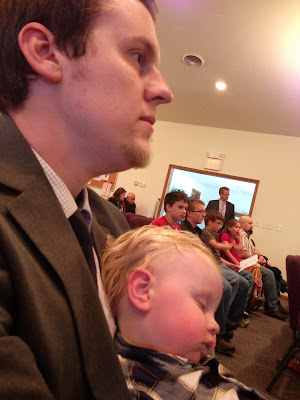 All of our kids did really well during the convention.  We had some hiccups, but considering they're all under the age of 3, I'm thankful they did so well!  Thank goodness for coloring books and goldfish crackers!  Max loved having Paul around so much.  He would snuggle up to him a lot and eventually fall asleep.  I love seeing Paul with his babies! 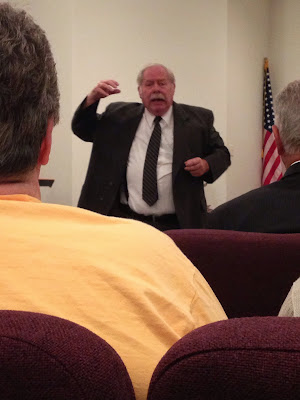 Brother Ard was our evangelist for the weekend.  I enjoyed his sermon very much!  Brother Ard is one of those people I could listen to all day.  His type of preaching is telling stories of his experiences.  I love that!  I felt so blessed by his sermon. 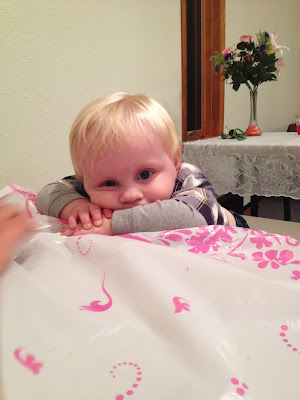 You can tell Max was having a lot of fun, huh?

I was happy to see Brother Thompson was able to attend this year!  I have known him pretty much my whole life.  He is such a sweet man.  Even though his voice is not what it used to be, and he thought he would never sing or preach again, he was still a blessing.  He gets so involved in the songs when he leads!  He worships the Lord with his whole body.  You can see the presence of God all the way down to his toes.
Brother Thompson sang a simple chorus near the end of the convention, one I remember him singing back in the day and my Dad singing it often too, and you could see he meant every word.  "I Just Want to Thank You" is such a simple little song, yet so powerful when you sing it to the Lord and mean it with your whole heart!
Sunday afternoon Paul and I had to say our goodbyes to all the ones who were going on to camp.  I know they are having a great time!
The trip home was not as easy as the trip there.  As a matter of fact, the kids took turns crying nearly the whole 8-9 hours we were on the road!  I felt bad for Dave since he had to ride home with us.  I know it wasn't fun for me, but I tolerate it since they're my kids.  Poor Dave was just stuck in there!  Haha! 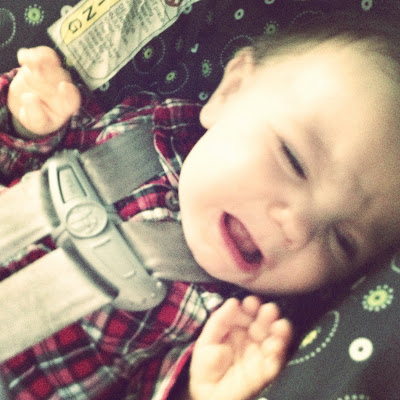 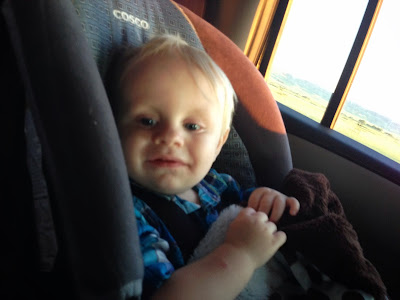 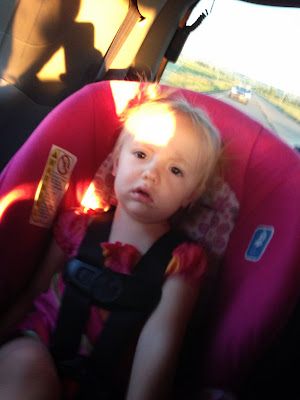 Zoe was so grumpy she didn't even want her picture taken!  She got mad at me for taking it anyways.  I told her to get over it.  Haha! 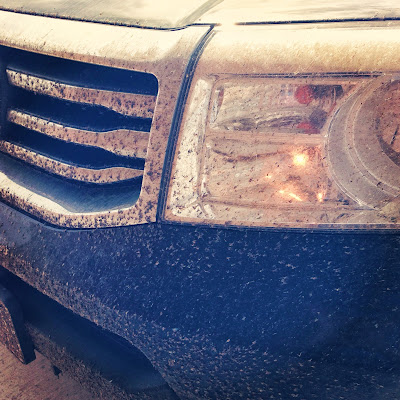 This is a picture of the front of our car.  It looked WORSE than the picture is even showing!  You could not even read our front license plate.  Because of all the rain we have had lately we have an abundance of mosquitoes.  It has been a nightmare!  On the last leg of our trip it sounded like it was raining -- it was the amount of mosquitoes hitting our windshield.  I was very much disgusted!  Oh, and to top it all off, we ran out of washer fluid.  Gross!
We got home around midnight.  We dropped Dave off at his dark and lonely looking home (wink wink) and then we headed home, put the kids in their beds, and then went to bed ourselves.  We didn't even unpack the car!  We were so exhausted.
Poor Paul went to work bright and early yesterday morning and worked a long 12-hour day.  Mondays are always rough since that's his biggest work day, but at least he gets off around 3:30 the rest of the week -- and now has Saturdays off!
Yesterday morning, after the kids had their breakfast, I put Zoe and Max in the stroller and I strapped Titus to my front and we went for a walk.  I walked 1.55 miles to Paul's work to get the car.  I know it sounds crazy, but I have been walking a lot lately -- kids included -- as a workout, so I enjoyed the walk very much!  The kids did great, too!  I am so thankful for that.
After we got the car we grabbed lunch for Paul (and us) and then the kids and I headed to Walmart.  Again, the kids did very well and I'm thankful!  The only downfall about that trip was I forgot Titus' pacifier in the cart.  Rats!
We came home and I put all the kids down for a nap.  I took advantage of the "quiet" and took a shower.  While in the shower I heard Zoe running around the house.  She eventually came into the bathroom and said she couldn't sleep.  I also heard the boys laughing at each other in their rooms.  I made Zoe go back to bed and I finished my shower.
After I took a shower I did a quick pick up around the house.  It should have been a thorough one...but the kids did not cooperate.  THEY DID NOT TAKE THEIR NAPS.  Our neighbor down the street invited us over to play so the kids and I walked down there.
When we got there it was a little rough.  That's what happens when kids don't take their naps.  But after awhile the kids were playing in the sandbox and having a grand time!  Keshia and I enjoyed being out in the sun and talking and watching the kids play.
Before I knew it, it was time to go pick up Paul from work.  As soon as I picked him up it started to rain.  Grilling for dinner was out of the question. :-) 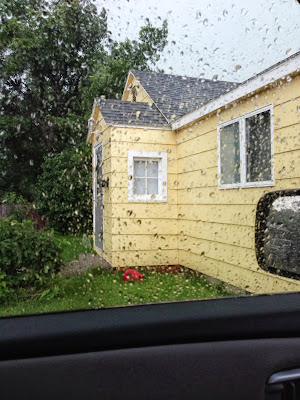 The kids fell asleep on our way home (shocker) so Paul and I just sat in the car for quite awhile.  I was not looking forward to running my kids through the rain -- even though our house was right there!!  Eventually I just did it and everyone was wide awake by the time everyone was in the house.  Oh well! 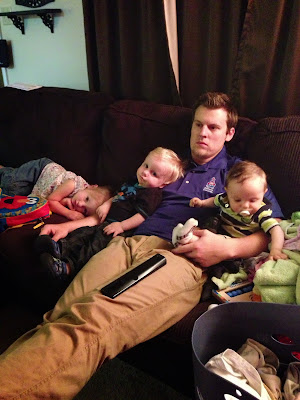 While I was making dinner I happened to notice Paul sitting on the couch and all three of his babies were snuggled up to him.  I absolutely love this!  They are so happy when he comes home -- especially on Mondays when he is gone all day.  I'm so thankful Paul is such a wonderful dad!
I'm thankful for the weekend we had and the opportunity to at least go to convention.  God is good and I'm always thankful for His blessings He bestows on us!
Today the forecast shows the high to be 80 and sunny!  Paul gets off at 3:30 so I'm sure we will somehow take advantage of the beautiful weather this afternoon.  I have a lot to do around the house before, though!
HAPPY TUESDAY!