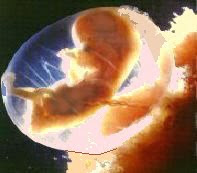 Your new resident is nearly an inch long — about the size of a grape — and weighs just a fraction of an ounce. She's starting to look more and more human. Her essential body parts are accounted for, though they'll go through plenty of fine-tuning in the coming months. Other changes abound: Your baby's heart finishes dividing into four chambers, and the valves start to form — as do her tiny teeth. The embryonic "tail" is completely gone. Your baby's organs, muscles, and nerves are kicking into gear. The external sex organs are there but won't be distinguishable as male or female for another few weeks. Her eyes are fully formed, but her eyelids are fused shut and won't open until 27 weeks. She has tiny earlobes, and her mouth, nose, and nostrils are more distinct. The placenta is developed enough now to take over most of the critical job of producing hormones. Now that your baby's basic physiology is in place, she's poised for rapid weight gain.
As for me- I still have good days and bad. Sometimes I'm sick as a dog, and then I'll have days like today where I feel perfectly fine. The past 4 days I've felt light-medium cramps so I must be growing fast. Very exciting!!
Have a wonderful new year!!
Posted by Grace & Co at 7:29 PM